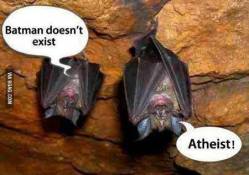 A commitment to ecumenicalism all too often leads to intolerance and hostility toward atheists.

„Can’t we all just get along?“

Among progressive and moderate religious believers, ecumenicalism is a big deal. For many of these believers, being respectful of religious beliefs that are different from theirs is a central guiding principle. In this view, different religions are seen as a beautifully varied tapestry of faith: each strand with its own truths, each with its own unique perspective on God and its own unique way of worshipping him. Her. It. Them. Whatever. Respecting other people’s religious beliefs is a cornerstone of this worldview… to the point where criticizing or even questioning anyone else’s religious belief is seen as rude and offensive at best, bigoted and intolerant at worst.

And this ecumenical approach to religion drives many atheists up a tree.

Oh, let’s see. Where shall I begin?

Progressive and moderate religious believers absolutely have objections to religious beliefs that are different from theirs. Serious, passionate objections. They object to the Religious Right; they object to Al Qaeda. They object to right-wing fundamentalists preaching homophobic hatred, to Muslim extremists executing women for adultery, to the Catholic Church trying to stop condom distribution in AIDS-riddled Africa, to religious extremists all over the Middle East trying to bomb each other back to the Stone Age. Etc., etc., etc. Even when they share the same nominal faith as these believers, they are clearly appalled at the connection: they fervently reject being seen as having anything in common with them, and often go to great lengths to distance themselves from them.